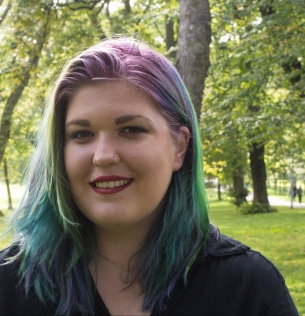 Caroline is a PhD candidate at Royal Holloway specialising in Early Modern English convent music. She has a Master’s degree from Royal Holloway and a Bachelor’s in Music (first-class with honours) from the University of Edinburgh.

Born in Ann Arbor, Michigan, Caroline originally trained as a violist at the University of Michigan junior conservatoire and Huron High School arts programme. Upon embarking on an academic music degree, she recognised her love for composition and history, and realised how intertwined the two were. Since then, she has been immersed in some of the world’s top early music scenes, and has worked hard to promote feminist historiography in early music performance circles.

Over her time as a Bachelor’s student, Caroline studied conducting with Greg Batsleer and Russell Cowieson. She also completed a choral conducting internship with the Scottish Chamber Choir, under Iain McLarty. Caroline has conducted the Information Services Group Choir, New College Choir at the University of Edinburgh, the Royal Dick Veterinary School Orchestra, and served as Musical Director for Le Petit Verre Opera Production’s premiere production, Hansel and Gretel. She has also assisted as conductor with the Dalkeith Singers, the Edinburgh Practice Choir, the choir of Greyfriars Kirk, and the tour choir of the Edinburgh University Singers (alongside Dr. John Kitchen, MBE). In 2016, Caroline started a mixed voice choir called Voces Inauditae, an ensemble dedicated to the integration of lesser known composers into the world of choral music, with an emphasis on gender equality. At least half of each programme contain music by female composers. They also work to include composers from traditionally marginalised social groups, as well as giving up-and-coming composers the chance to premiere their work. 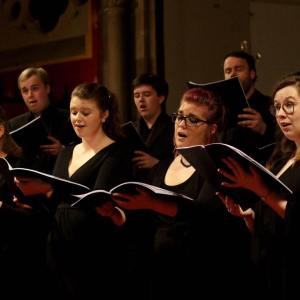 As a composer, Caroline has previously studied primarily with Gareth Williams and Peter Nelson, as well as briefly with John Traill. Caroline’s compositions have been performed around the country, featuring performances by Christ Church Cathedral Choir, the Edinburgh Composer’s Orchestra, the Scottish Chamber Orchestra, St. John’s Chapel (Oxford), Wolfson College Choir (Oxford), and more. She was recently the student Composer-in-Residence at the Picture Gallery of Royal Holloway, in conjunction with the New Voices Consort, in which she wrote a re-interpretation of ‘In the Bleak Midwinter’, exploring protrayals of motherhood, breastfeeding/breasts, and women as parents.

Caroline’s research revolves around the music of 17th- and early 18th-century English convents in exile. She has featured as a singer-scholar on multiple concert projects featuring her research at Christ Church Cathedral Oxford, such as The Life of St Frideswide (October 2019 in collaboration with Korrigan Consort and lutenist Liz Kenny) and ‘To Play King’: Baroque Music of Court and Cloister (August 2021 in collaboration with Sub Rosa). She has also co-led multiple projects at Oxford University, including The Gentlewomen (an opera collage exploring femicide, music, and the 16th century Ferrarese ensemble the Concerto delle Donne, funded by TORCH, February of 2020 ) and the mini-documentary Doors, Dwellings, and Devotion: Recreating an Anchoritic Rite of Enclosure (funded by the John Fell OUP fund in collaboration with the Oxford University Music Faculty, August 2021).

Caroline is currently active as a singer and freelance violist/violinist in Oxford.